As anyone who knows me, my being semi-retired is somewhat of a misnomer; this past week has involved traveling solo from Austin, to New Mexico to Colorado to Wyoming. I end the week at Pryor Oklahoma for a three night hard rock festival known as Rocklahoma (one of those multi-day music events was on my bucket list because my Mom did not let me go to Woodstock ’69 — I was only 13 at the time). 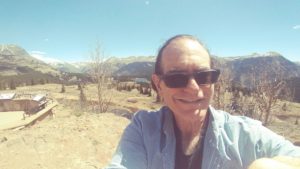 Part of this trip was to continue to explore native American Indian settlements and Chaco Canyon in particular, located in New Mexico, near the Colorado border was a definite early part of the trip planning but quite a trek to get to; I had to traverse 21 miles by car on really bad roads and when I got to the visitor center I decided to take the nearest hiking trail to a ruin of a Chacon great house dating back to around 900 AD. The 3+ mile hike was hot and dry and that has been the norm for New Mexico. I saw an Indian fellow after the hike on the way back to Route 550 tending some horses and I felt that it was a very hard lifestyle. I wonder if this area was more hospitable 1000 years ago? 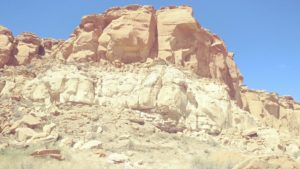 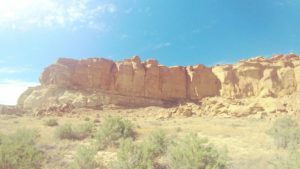 A cool little town Durango, Colorado was an overnight stop and the next morning I embarked on the million dollar highway which I believe is so named because of the views and not the cost of the highway. The selfie of me above is from the Molas Pass about 10,900 elevation). It was a truly breathtaking journey (altitudes up to 11,000 feet and my trips to these high altitude areas do affect me with slight headaches, shortness of breath, muscle weakness, nausea and general malaise). This photo below is from the Switzerland of Colorado, Ouray on the way to Denver. 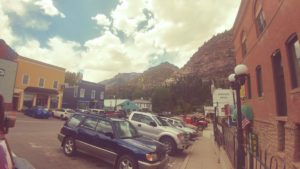 This trip involves a combination of Airbnbs and low cost motels. For those of you who have not yet tried Airbnb it is highly recommended; I have been doing them probably since about 2010 and they vary widely in terms of the accommodations. If you do not like sharing a bathroom, the best way is to either get an entire apartment or house but obviously that costs more generally than a private room with or without a private bath.

I spent several rainy and cold days in a northern suburb of Denver and got to see my stepdaughter, Cassie and her four year significant other, Alexander, for brunch on Sunday. Alexander, who is a graphic designer and did the logo for my Built Environment company, suggested I rename my novel I am working on to 2079; the year it takes place. I think he is right so I have started to rework the novel and hope to give him a draft in a few weeks so he can start working on a cover for it. I have about 70 pages including outlines and I do not expect it to be more than 150 pages, ideally. 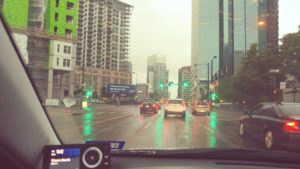 One of the main reasons for this trip was to visit a piece of land in northern Colorado that could be an ideal hybrid microgrid. The definition of a microgrid is to provide energy/electricity to a particular area rather than the centralized grids that are located throughout the U.S., spanning enormous areas. Back in 2013, I went to a seminar in New York led by Europeans that introduced the term “district energy” to me and that can be likened to a kind of microgrid for a particular neighborhood rather than a large scale area. Areas like New York City were originally microgrids back when Edison first introduced electricity to NYC in the late 19th century. These days Con Edison and its affiliates are more of the centralized grid genre and though largely efficient and robust these centralized grids are also fragile and not particularly resilient. The trend that started in Europe is now being explored in the U.S. Perhaps the ideal would be to have centralized grids decentralize into various sized microgrids and have the remaining central grid performing N+1 redundancy when peak loads come into play. This could be a highly lucrative business for the utility especially if they could price peak requirements extremely high and encourage conservation of energy to avoid paying very high peak pricing. In other words, price electricity correctly; taking into account its social and environmental costs as well its financial costs. 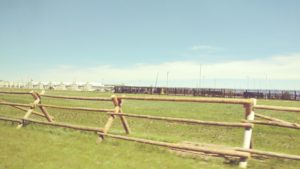 In the instance of the Colorado/Wyoming border piece of land, the ideal situation would be solar covering the existing ground and a utility size cogeneration plant of about 200 megawatts (MW) to service the solar, neighboring wind and natural gas for smoothing out the times when inadequate battery storage does not allow solar and wind to sufficiently provide the necessary energy to run the microgrid. At these times, natural gas or nuclear can augment renewables until battery storage is cost effective enough to have co-generation operate on a 100% renewable basis. In a Call to Action, we talk about Molten Salt Reactors that are nuclear but less volatile and do not require uranium which is a depletable resource; this technology is promising but still not really taking off. Adding a cloud data center would be the icing on the cake plus 227 million gallons per year for the next 100 years of pristine aquifer water. 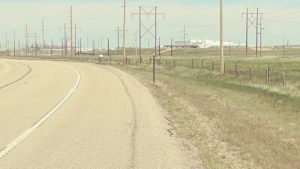 Driving from Colorado to Wyoming you see this amazingly large WalMart distribution center with 18 wheelers lined up (like the Uber drivers at an airport) to deliver off label goods to be packaged into WalMart trucks (hmm?).. Next door is a $6 billion Microsoft data center that has been expanded several times in the past few years. It is interesting that this facility requires enormous amounts of electricity and actually likes the cold climate because their machines run so hot. In fact, at one point, part of the Microsoft facility was outdoors. Wyoming has amazing natural beauty and enormous energy generation in the form of coal and natural gas, predominantly, but wind is also present; I have yet to see solar but I have only explored the southern portion of the state a wee bit. The trucking as well as rail transport (through Union Pacific) of goods and energy is what Wyoming commerce is all about. In some ways it is the gateway to the west coast and provides a route to the midwest and southwest as well. 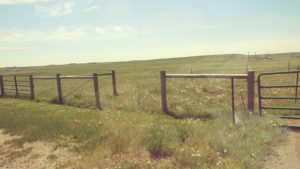 The microgrid concept appears relevant for these large scale data centers which require enormous power 24/7 365 days per year. A similar facility is being constructed in New Mexico by Facebook with a requirement of 100% renewable energy; I am not sure how they will accomplish this in the short run, perhaps renewable energy credits (RECs). At any event, tech companies all want 100% renewable energy generation; it is what their leaders, their employees and for the most part, their customers want. The only people who do not want renewable energy are non-renewable energy producers and their service providers. We have to be aware that petroleum has applications in agriculture, pharmaceuticals and many other industries. It is time to start considering the non-renewable nature of these assets and better deploy them so future generations can enjoy their benefits as well. Three areas where we can start weaning off of fossil fuels are: 1) power generation for grids, be they centralized or microgrids, 2) plastic bags and 3) transportation.

When you drive around the vast mountainous regions of the northwestern and southwestern sections of the U.S., you see how important fossil fuels are in getting goods transported and how power is generated; what strikes me the most is the incredible vastness of land: agricultural and energy driven land with very few human beings co-existing in this seemingly desolate setting but obviously contributing to the servicing of the hundreds of urban centers located throughout the U.S.

Preview of Wyoming — the trip continues 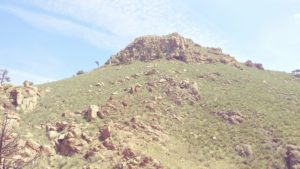 Previous StorySunday Blog 5.13.2018
Next StoryA New Model For Our World Economy — Provocative! Read At Your Own Risk